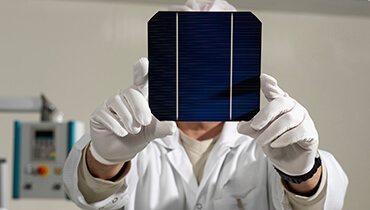 A single solar panel can generate up to 250 watts of power at peak capacity.

When you start to investigate solar energy one of the first words you will come across is “photovoltaic”. This word is made up of two separate “mini-words”: ‘photo’ and ‘voltaic’. ‘Photo’ comes from an ancient Greek word, ‘phos’, which means ‘light’. This word is thousands of years old and has found its way into several words in modern usage, such as photograph and photosynthesis. The ‘voltaic’ part of photovoltaic comes from a man called Alessandro Volta, an early scientist who was born in Italy more than 260 years ago in 1745 and lived until 1827. Alessandro Volta is famous for inventing the first chemical battery. The ‘Volt’ is the unit used to measure the amount of electrical energy carried by a certain quantity of electrons. Putting these two word meanings together, how do you think photovoltaic could be translated?

There are two main types of solar panel – one is the solar thermal panel which heats a moving fluid directly, and the other is the photovoltaic panel which generates electricity. They both use the same energy source – sunlight – but change this into different energy forms: heat energy in the case of solar thermal panels, and electrical energy in the case of photovoltaic panels.

Photovoltaic panels have no moving parts – the source of electricity in these types of solar panels is the photovoltaic cells.

What do they do?

Photovoltaic cells generate electricity from sunlight, at the point where the electricity is used, with no pollution of any kind during their operation. They are widely regarded as one of the solutions to creating a sustainable future for our planet and to combat the clear and present danger of Global Warming and Climate Change.

How do they work? 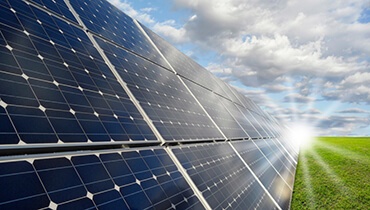 Wind turbines can generate back-up electricity at night or in cloudy weather.

A photovoltaic (PV) system can be as simple as a panel connected directly to an appliance such as a pump, fan, or light. The electric current produced from a photovoltaic cell is Direct Current (DC), the same as that produced by a battery. Direct current can be used to power specially designed DC appliances, including lights, televisions and refrigerators. However, most appliances we use require Alternating Current (AC) to operate. 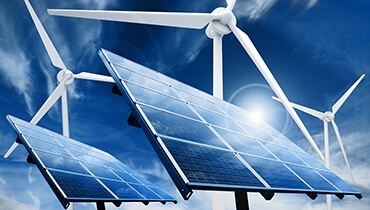 Wind turbines can generate back-up electricity at night or in cloudy weather.

Most appliances we use require AC electricity because most buildings are connected to “the grid” (outside power line network). The grid transports electric energy generated in power stations which is always AC. Power stations produce AC power that alternates (moves back and forth) fifty times a second (50 Hertz).

An inverter can also export any extra power generated by the solar panels back into the grid where it can be used by other consumers (eg your neighbour).

Off-Grid Systems, sometimes called stand-alone systems, may be necessary in remote areas where it is too expensive to build power lines to connect to the grid. Systems not connected to the grid will not be able to import (get from the grid) any extra electricity required, such as at night or during very cloudy weather. Another back-up way of generating electricity (such as with a diesel, biomass, hydro or wind generator) is required.

Usually an off-grid system will have a way to store any excess electricity generated from solar during the day.

Storage of energy is usually done with a battery or battery bank (a lot of batteries connected together). A lot of research is being done into improving batteries, as well as other ways of storing energy such as high speed fly-wheels, or by generating and then storing hydrogen gas.

To find out more about energy storage here:

These systems are a hybrid between an on-grid and off-grid system. In the event of a power- cut, normal grid-tied photovoltaic systems automatically shut down for the safety of electricians who might be called in to work on the lines nearby. However essential appliances and equipment can still be run from energy stored in the batteries, while the solar panels can also continue to charge the batteries. Another advantage of battery-backed systems is that if the photovoltaic panels cannot supply enough electrical energy to the appliances (eg if a cloud passes over), then the energy is just topped up from the battery.

The disadvantage is that it is a lot more expensive to install and the batteries need more frequent maintenance and replacement.

How Many Solar Panels
are Needed?

Peak capacity is how the size of a generating system is defined. If a single panel has a peak capacity rating of 250 watts, then 8 panels connected together into a photovoltaic array will have a peak capacity of 2,000 watts or 2 kilowatts peak (2 kWp).

This does not mean that this is the power you will always get from the panels as this requires optimum conditions. There are also some small losses going through the wires to the inverter and then in the inverter itself.

What is the performance of Photovoltaic panels?

A common way to measure the performance of photovoltaic technology is efficiency. There are different ways to measure efficiency but the most typical measure is peak efficiency, which is noted in the manufacturers’ product information sheets. Peak efficiency describes the maximum percentage of light energy that can be transformed into electrical energy at any one point in time. A more useful measure of the effectiveness of photovoltaic technology in real conditions is its productivity or performance through time.

This measurement is done in a laboratory under controlled conditions: the electrical power of the panel (or cells) is measured while the panel is illuminated with artificial sunlight at an intensity of 1000 watts per square metre, the temperature of the cells is kept steady at 25°C, and the panel is kept facing directly at the light source. Typically the power output will be between 150 and 200 watts for crystalline silicon panels with an area of exactly one square metre. This means the peak efficiency of newer panels is between 15% and 20%. Peak efficiency is quite a useful measure because it allows us to see how the panels will perform in optimum conditions, and it allows comparison between different types of photovoltaic panel but it is not the whole story.

In real conditions the strength of sunlight is varying with time of day, season and weather.

Usually the sunlight is not shining directly on the panels but is at an angle to them as the Sun moves through the sky (except for solar-tracking systems where the panels follow the Sun through the sky, but these tend to be too expensive for most purposes). The angle of the sun changes with the seasons – reaching its highest angle at the summer solstice and lowest angle at the winter solstice. Passing clouds block some of the sunlight which reduces the amount of energy generated. Also, the temperature of the panels when the sun is shining is often a lot higher than 25°C. As temperature increases, the panels experience a slight decline in output for each degree above 25°C. For panels in direct sun in summer this temperature could be 60°C, leading to a 10%-15% reduction in power output.

Efficiency is defined as the amount of energy that comes out of a system compared to the amount of energy that went into it. So to calculate the actual efficiency you need to know how much raw solar energy (called insolation) went into the panels and how much electrical energy came out. This can be done with the Solar Schools data that is collected from schools, using the raw solar data from the nearest weather station and the actual electrical energy output of the panels.

Because the size of the photovoltaic array varies between installations, you need to work out how much energy one kilowatt of peak capacity (1 kWp) would generate in a year.

The units for performance are therefore “kilowatt hours per kilowatt peak of installed capacity per year”. This can be shortened to kWh / kWp / year – meaning “how much energy a certain rating of panels generated in a year”.

Some years have less sunshine due to more cloudy weather than usual, so the solar electricity production will be lower as well. Also, if there are any periods when the photovoltaic system cannot operate, such as during building alterations, this will lower the overall performance for that year.

Planning to Install a Photovoltaic System 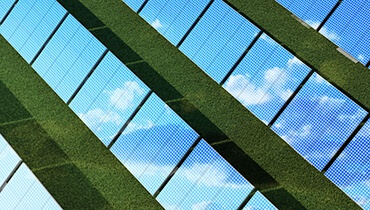 There are a number of factors that will influence the decision to install photovoltaic panels on either a new building or an existing one.

Some people will install solar panels mainly because of environmental concerns and to increase their sustainability and decrease their carbon footprint. In the early days of photovoltaic technology when it was very expensive and not economic for most situations with a grid connection, these enthusiastic people drove the expansion of this “green energy” technology. However, this is changing quickly as photovoltaic technology goes mainstream in many parts of the world, eg Germany, Spain, Italy, Australia and California, USA.

Now that the cost of panels has dropped dramatically, and looks set to continue falling, it is close to reaching the point where it is economic for building owners to install them – and to expect a positive payback from doing so.

The economic factors are:

When do you use electricity?

Advantages and disadvantages of installing a PV system at home: