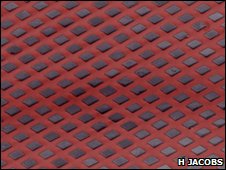 The approach made a device of 64,000 parts in three minutes

It uses the fact that oil- and water-based liquids do not mix, forming devices from components that align along the boundary between the two.

The idea joins a raft of approaches toward self-assembly, but lends itself particularly well to small components.

The work is reported in Proceedings of the National Academy of Sciences.

Crucially, it could allow the large-scale assembly of high-quality electronic components on materials of just about any type, in contrast to “inkjet printed” electronics or some previous self-assembly techniques.

Such efforts have until now exploited the effect of gravity, assembling devices through so-called “sedimentation”.

In this approach, “blank” devices are etched with depressions to match precisely-shaped components. Simply dumped into a liquid, the components should settle down into the blank device like sand onto a riverbed, in just the right places.

“That’s what we tried for at least two years and we were never able to assemble these components with high yield – gravity wasn’t working,” said Heiko Jacobs of the University of Minnesota, who led the research.

“Then we thought if we could concentrate them into a two-dimensional sheet and then have some kind of conveyor belt-like system we could assemble them with high yields and high speed,” he told BBC News.

To do that, the team borrowed an idea familiar to fans of vinaigrette: they built their two-dimensional sheets at the border between oil and water.

They first built a device blank as before, with depressions lined with low-temperature solder, designed for individual solar cell elements.

They then prepared the elements – each a silicon and gold stack a few tens of millionths of a metre across – and put different coatings on each side.

By getting the densities of the oil- and water-based parts of the experiment just right, a “sheet” of the elements could be made to “float” between the two, pointing in the right direction thanks to their coatings.

The conveyor belt process is to simply dunk the device blank through the boundary and draw it back slowly; the sheet of elements rides up along behind it, each one popping neatly into place as the solder attracts its gold contact.

The team made a working device comprising 64,000 elements in just three minutes.

Having proved that the concept works, the team is now investigating just how small they can go in terms of individual elements, or how large they can go in finished devices.

The approach should also work for almost any material, stiff or flexible, plastic, metal or semiconductor – a promising fact for future display and imaging applications.

Babak Parviz, a nano-engineering professor at the University of Washington in Seattle, said the technique is a “clear demonstration that self-assembly is applicable across size scales”.

The method tackles what Dr Parviz said is the most challenging problem – the proper alignment of thousands of parts, each thinner than a human hair. But it also works with the highest-performance materials, he said.

“For example, this method allows one to use single-crystal silicon, which is far superior to other types of silicon for making solar cells.”