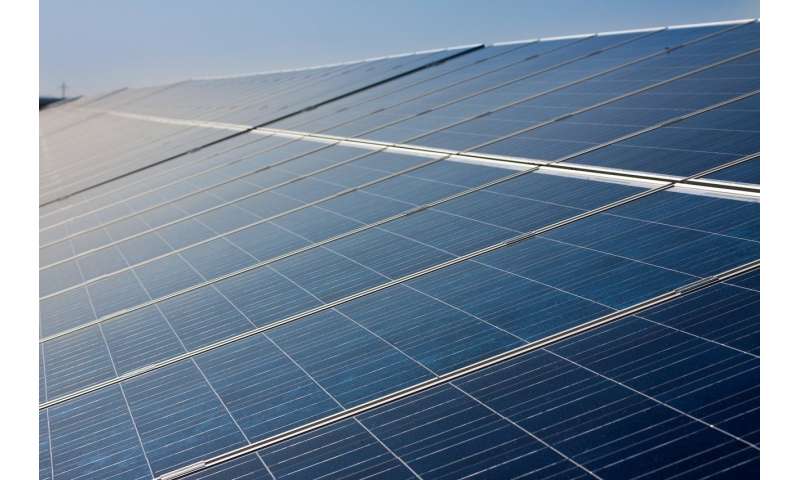 In the last couple of years, organic solar cells (OSCs) based on non-fullerene (NF) acceptors have demonstrated tremendous progress in power conversion efficiency (PCE). The majority of state-of-the-art OSCs in the lab is based on the so-called bulk heterojunction (BHJ) architecture consisting of a photoactive layer in blend of an electron donor and acceptor. The presence of numerous microscopic p-n junctions in BHJs enables sufficient surface areas where charge separation occurs, so that the photocurrent and PCE are increased. The device characteristics in BHJ-OSCs are critically affected by the nanostructure or morphology of BHJ films, featuring interpenetrating and continuous networks with domain sizes ideally comparable to the exciton diffusion length.

In comparison to BHJs, sequential film deposition to form planar heterojunctions (PHJ) is attractive because the morphology of donor and acceptor components can be controlled more independently. The large vertical phase separation naturally occurring in PHJs facilitates the extraction of photogenerated carriers toward the two electrodes. The limited area of donor/acceptor (D/A) interfaces has critically hampered the photovoltaic efficiencies in PHJ-OSCs. With stringent orthogonal processing solvents or thermal deposition (of the second layer) of the donor and acceptor films, the resultant devices often underperform those with BHJ structures, due to poor exciton dissociation. For this reason, the interdiffusions of acceptors into the donor phase have been applied with solvent engineering to increase the D/A interfacial area, resulting in increased short-circuit current (Jsc) in PHJ-OSCs.

Very recently, based on the polymeric donor PBDBT-2F and NF-acceptor Y6, researchers proposed a strategy to improve the photovoltaic performance and thermal stability for sequentially deposited PHJ-OSCs through dispersing the donor components into the acceptor-dominant phase. By this method, they achieve a record PCE of 15.4% in the PBDBT-2F/Y6 based PHJ solar cells, reaching one of the highest values reported on PHJ-OSCs with sequential film casting. Moreover, the charge transport balance in the PHJ devices is favorably improved with the incorporation of donors into the Y6-dominant phase. These modifications suppress bimolecular recombination and accelerate charge sweep-out. In a morphological standpoint, the favorable intermolecular π-π staking in Y6 is hardly affected at diluted concentrations of donor dispersions, which, on the other hand, modifies the photophysical process in PHJ-solar cells. Of importance, with the described donor dispersion, the PHJ films exhibit enhanced morphology robustness in association with smaller negative effects on the charge sweep-out in solar cells under thermal conditions. As a result, a better thermal stability in the PHJ-devices with donor dispersions has been achieved, with regard to that of BHJ solar cells.