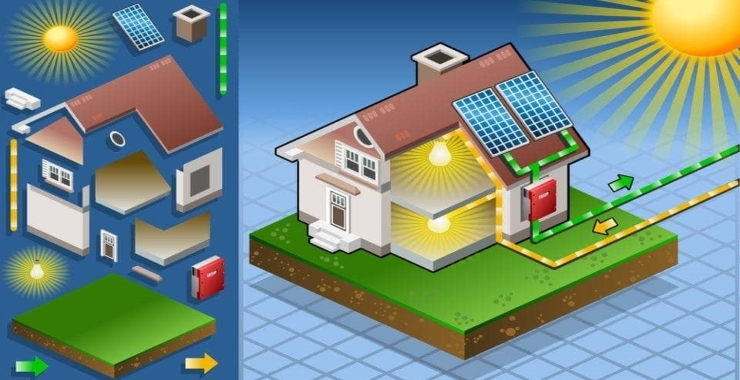 Solar panels work by converting sunlight into electricity at the atomic scale. When solar cells are struck by light, they produce a flow of electrons, or electric current. Since this process happens at such a small scale, it is invisible for humans. Compared with other renewable energy systems, panels are characterized by their lack of movement.

Solar panels produce a certain amount of energy that is determined by two main factors: the amount of sunlight reaching the panel, and the material composition. Some panel materials can collect more sunlight per square foot, leading to a more efficient and compact installation.

Solar panels have become a popular renewable energy option for homes and businesses, and this makes perfect sense when you weigh their costs and benefits. Solar power systems become more affordable each year, while electricity costs continue to rise. From a financial standpoint, adding panels to a building is an excellent investment. In this article we will be answering the common question of “how do solar panels work”?

How Exactly Does a Solar Panel Work?

A solar panel can be viewed as the opposite to an LED bulb, which is also an electronic device that uses semiconductor materials. Just like an LED bulb converts electricity into lighting, a solar panel absorbs light to produce electricity. This behavior is called the photoelectric effect, and it was first studied in the 19th century.

The name of solar panels can be misleading, since they work with any type of light. If you place a panel under an artificial bright light, it will start to produce electricity. However, only sunlight is a viable energy input, since it is delivered for free. Other light sources have either a fuel cost or an electricity cost.

The material used to make solar panels is normally silicon, which has many applications in the electronics industry. With a special chemical process, silicon can be treated so it will produce electricity in response to ligh541t.

Producing electricity without moving is a significant advantage of solar power systems. Other generation systems like wind turbines and diesel generators have moving parts, which are subject to mechanical wear. In these cases, the constant need for lubrication and part replacements makes maintenance difficult. Taking care of solar power systems is much easier, since the most demanding maintenance task is keeping their surface clean.

Why Are Solar Panels Connected to an Inverter?

Solar panels produce direct current (DC) electricity, while home devices use alternating current. A DC power source provides a constant voltage, while an AC source has a voltage that oscillates between positive and negative. Electric companies use AC power because it provides many advantages in electricity generation and transmission.

Basically, a solar inverter converts the DC output of panels into an AC power supply that is suitable for home appliances. Since the power grid also uses AC voltage, it can be synchronized with the solar power system. This has several advantages:

When a solar power system is synchronized with the power network, it is called a grid-tied installation. This is the most affordable system configuration, and also the most common.

What are the Different Types of Solar Panels?

As previously mentioned, solar panels use materials that produce electricity when exposed to light. Most panels are made of crystalline silicon cells that are wired together to add up their voltage. Typically, a panel will have either 60 or 72 cells.

Some panels do not have silicon cells, and instead they have a uniform surface. These are called thin-film panels, since the material that converts sunlight into electricity is deposited as a layer.

Monocrystalline, polycrystalline, and thin-film panels are the three main options available, and the polycrystalline ones have dominated the market. Solar shingles are emerging as a fourth option. They combine roof shingles and panels into a single element.

The panels themselves only represent a fraction of the cost of a complete solar power system. The costs involved when installing solar panels include special racking, the solar inverter, and electrical protection devices. When all solar costs are factored in, you can expect to pay $3 per watt of capacity in the United States.

As previously discussed, an inverter converts the output of panels into AC power for home appliances. Special racking is used to attach the panels to the roof, since they are not designed for direct installation. Also, solar panels need circuit breakers like any other electrical device. Electrical faults such as short circuits and ground faults can severely damage solar panels and their associated components.

Knowing how to install solar panels has become a useful asset in the United States job market, due to the high demand for solar systems.

Solar power is clean, and its cost continues to drop each year. However, solar systems still have a limitation that is shared with wind turbines: they depend on variable energy inputs to produce electricity. For this reason, you cannot go off-grid with solar panels alone, and batteries become necessary for nighttime and cloudy days.

Governments and power companies have developed and interesting concept to manage the variable nature of solar power, which is called net metering:

With net metering, your home can get savings for unused solar energy production. If your solar system is large enough to produce surplus electricity at noon, it can be exported to the grid and deducted from your nighttime consumption.

Solar panels work better when they receive direct sunlight. They can be mounted on tracking mechanisms to always face the sun, but this approach is only recommended when space is a limitation. In most cases, adding more panels is a better option than using a few panels with a solar tracker.