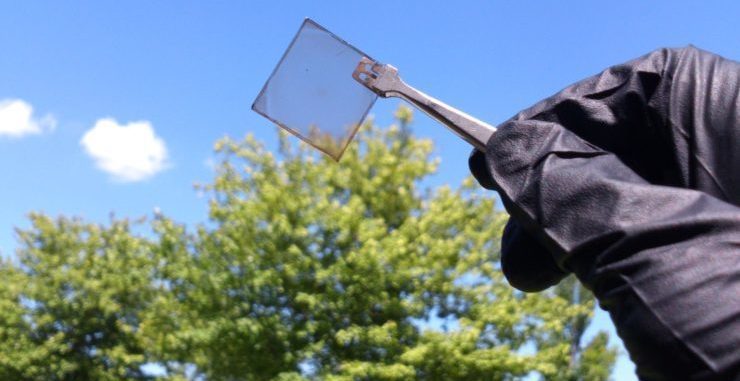 Perovskite is a synthetic compound which can be used with other materials to build a solar cell. Unlike traditional silicon cells, perovskite cells have the potential to operate at very high efficiencies. Its unstable nature has been a huge obstacle for its commercialization for over a decade, but researchers might have finally cracked the code.

More About the Research

Research led by a team from the Purdue University and aided by several other high-ranking institutions published their findings in the Nature journal on April 29, 2020. The research revolves around halide perovskite, a flexible material which has been known to perform as good as or better than traditional silicon solar cells. However, it is an unstable material and does not last.

The research found that adding bithiophenylethylammonium, a bulky material molecule to the perovskite’s surface inhibits the ion movement and reduced degradation of the material. This makes it suitable for high-performance, long-life solar panels. Additionally, it could make perovskite solar cells comfortably withstand temperatures up to 100 degrees Celcius, which has been highly desirable for a long time.

What sets halide perovskites apart from traditional solar materials is flexibility. The material can be turned into paste or paints and applied to a base to produce a flexible solar panel. This could eliminate the glass, frame and other bulky and expensive components, making solar panels durable, flexible and much cheaper than they are today.

According to Purdue’s Asst. Prof. Letian Dou, perovskites have developed a lot in just over a decade than silicon solar tech has done in six decades. Another Assistant Professor, Brett Savoie, says this research can allow us to combine the best of two different perovskites to make a much more useful material, which has been unheard of so far.

Enzheng Shi, a postdoc researcher and team member in the research team at Purdue, says that this will “Bridge the gap between layered halide perovskites with two-dimensional materials, such as graphene, boron nitride and transition metal dichalcogenides”. He also stressed that that these findings “Represent critical fundamental insights into the stabilization of halide perovskite semiconductor materials and provide a new materials platform for future applications such as complex and molecularly thin superlattices, devices, and integrated circuits”. As his comment suggests, this research not only opens new possibilities for solar technology but also for other electronics, such as better computer chips.

A solar material that is highly efficient, yet cheap and durable might just be the key to powering the majority of the world by solar. Perovskites have been a frontrunner in the race to better solar materials, and record efficiencies of close to 30% have already been achieved in laboratories. This research might soon bring the benefits of perovskite solar from the lab to the market.