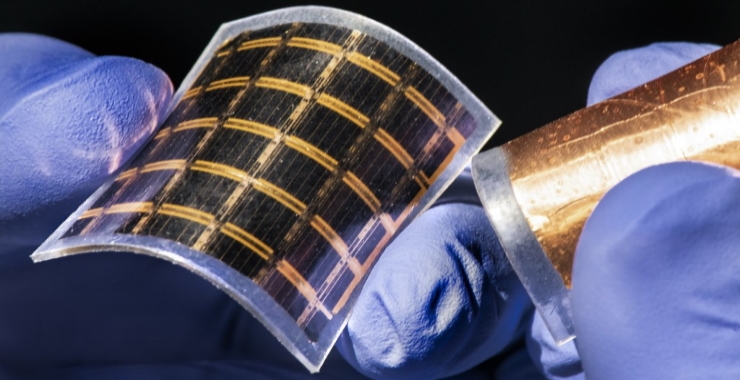 When one hears the word solar, an image of vast fields or roofs with rectangular blue panels likely comes to mind. But that is about to change. A new, ultra-thin and ultra-flexible solar cell has been developed and tested. This same research was undertaken at the Monash University, the University of Tokyo and the RIKEN institute in Japan.

Although flexible solar cells aren’t a new invention, this development is exciting for two main reasons. This cell’s efficiency is significantly higher than earlier developments, at 12.3%. For a cell with thickness that is only a tenth of a human hair (3 microns), it is a big achievement. Secondly, this is an Organic Solar Cell (OSC) which means it is environmentally friendly and cheaper to produce.

All the previous attempts at creating ultra-thin solar cells have resulted in prototypes with a few serious drawbacks:

This research seems to have solved the two problems above. The cell developed in question has respectable efficiencies. Though not at par with regular solar cells, considering their ease of manufacturing, 13% could still be a great number to have.

These cells do not need the manufacturing of several bulky items and assembling them in specialized facilities. Producing them could be as simple as continuous printing!

On the durability part, the cell is a promising advancement. It has a degradation rate of less than 5% for nearly 5000 hours of atmospheric conditions. In total, the cell claims a shelf life of over 11 years and power generation capacity for a decent 20,000 hours.

How It Was Achieved

Interestingly, the procedures in achieving this breakthrough did not employ entirely new processes. The crucial stage was the use of a non-fullerene acceptor (NFA) as well as the post-annealing heat treatment of up to 150 degrees Celsius.

Putting the excitement of the lab results aside, what matters in the end for any development are the implications in the real world. Silicon-based, rigid solar panels have ruled the industry, while ultra-thin solar has not been taken seriously for its lack of performance and longevity. However, this research establishes a new possibility for the near future.

Disappointingly, crystalline solar is unsuitable for applications that are portable and demand flexibility. This applies mainly to wearables. An entire backpack made of a solar power generating surface, for example, is no more unimaginable.

With mass production, ultra-thin solar cells might reach incredible levels of cost-effectiveness. It might, at some point, not be a surprise to see over half of the objects exposed to sunlight sporting a power generating layer!