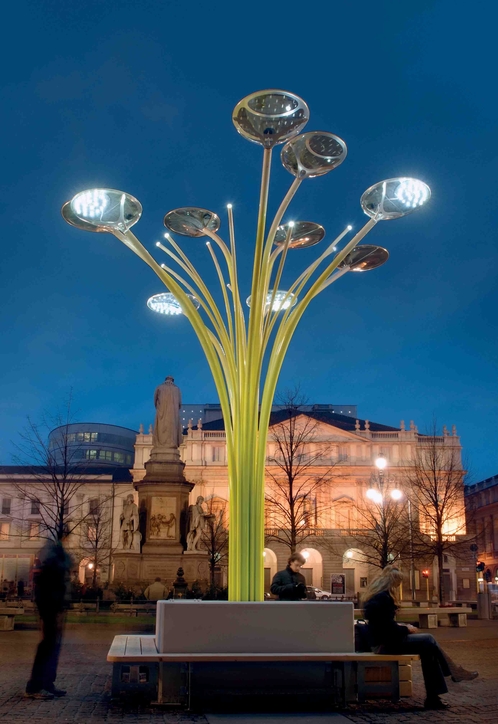 Designed by Ross Lovegrove and manufactured by Artemide, the Solar Tree will be a public installation during London’s 2012 cultural and Olympics celebrations.

Part public art, part sustainable street-lighting solution, this is meant to be a centrepiece to the forthcoming Clerkenwell Design Week.

“This is a project that celebrates design, nature and art and represents the DNA of our time,” said Lovegrove, who has called himself a ’21st Century translator of technology’.

Lovegrove’s concept was realised with the help of lighting company, Artemide, and its founder, Ernesto Gismondi.

Measuring six metres tall, the solar-powered streetlamp adds nature into the urban landscape. Its green trunk has 10 branches which radiate light to the street below.

The solar energy is accumulated through photovoltaic cells in the ‘heads’ and stored in integrated batteries. Four of the ten ‘heads’ and an additional ten ‘blades of grass’ light up the street from dusk until dawn. By day, the sculptural concrete base makes for a meeting point.

Storing enough electricity – even during cloudy days – demonstrates that using renewable energy for street lighting to cut emissions is possible, and the Solar Tree could become the main form of street lighting across Europe, according to the designer.

It can be seen at EC1’s St John’s Square from May to September.

Lovegrove believes street furniture can and should be used to meet society’s demands for public energy sources to tap into – from chargers for mobile phones and laptops to plug-ins to power cars.