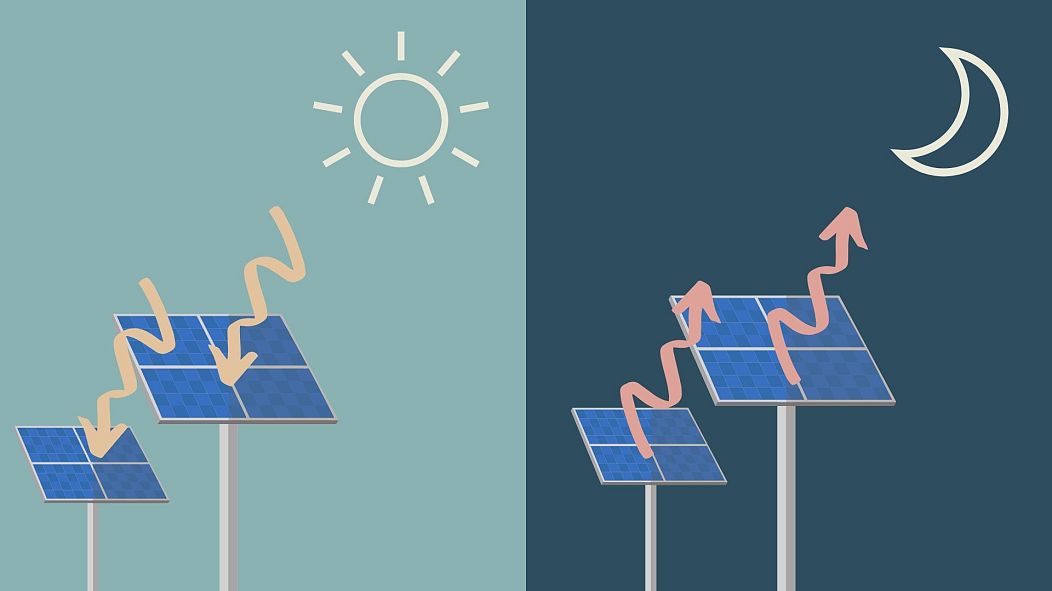 A groundbreaking theoretical study from two UC Davis researchers explores the possibility of using thermoradiative “reverse” solar cells to generate power from Earth’s residual heat instead of from direct sunlight. The cells work based on the principles of heat flow, also known as thermal radiation. Heat naturally flows from warm areas to cool areas. This technology aims to harness that natural process and generate usable energy.

During the day, energy heats up Earth, but that heat then dissipates back into the atmosphere once the sun sets, according to Tristan Deppe, a graduate student researcher in the Department of Electrical and Computer Engineering and the first author of the paper.

“The coldest time of day is right before sunrise because the earth has been losing energy all throughout the night,” Deppe said. “What we’re trying to do is extract some electrical power from the heat loss that is always happening from the earth.”

In their theoretical paper, the researchers outline a potential system for increasing the amount of energy harnessed from photovoltaic cells. They propose a design for a thermoradiative cell that generates electricity from the flow of heat. In this system, heat energy flows from the sun-warmed Earth into the cold abyss of space.

The mechanism of thermoradiative cells parallels that of traditional solar cells, but it uses different materials. Solar panel cells are made primarily of silicon, which optimizes energy captured from the sun and minimizes production costs. But sunlight and heat have different wavelengths, so the best material for thermoradiative cells is slightly different to harness the maximum amount of energy.

Solar energy, generated by PV cells, is one of the most popular sustainable energy sources in use today. However, solar cells have one major pitfall: limited daylight hours.

“The problem with solar cells is that there is no sun 24/7,” said Jerry Woodall, a distinguished professor in the department of electrical and computer engineering. “To make things really attractive to move to solar energy as a primary source of energy, you’re going to need storage. And another problem is that batteries are expensive and they wear out.”

Solar cells only generate power during the day when the power grid is under the least amount of stress, yet demand for electricity peaks in the evening hours when solar panels are the least effective. Implementing thermoradiative cells that harness heat energy could partially alleviate evening electricity demands. In theory, these cells could add up to 12% more power to the daily amount generated and at night when it is needed most.

Atmospheric conditions, such as cloud cover, are another limiting factor of both solar cells and thermoradiative panels. Solar panels are less severely affected if they are strategically placed to maximize electricity generated, according to Adam Moule, a professor in the Department of Chemical Engineering.

“There is a lot of sun in Arizona, not so much in Michigan,” Moule said via email. “There is lots of sun in Florida, but frequent hurricanes make investment in solar farms very risky. It doesn’t make sense to replace forest or high quality farmland with PV panels. For all of these reasons it will be necessary to put the panels on buildings, over canals, over parking lots, and anywhere that does not impact land use and the economy.”

Thermoradiative panels would most likely be constrained to the same areas, since they are most effective in areas with very little cloud cover. Deppe suggests they may be best used in already existing solar farms in desert climates where skies are clear and infrastructure is already in place.

Creative placement of thermoradiative cells can also mitigate industrial contributions to climate change. Since the cells absorb heat that’s radiating out into space, they could also be used in factories to generate power from heat in industrial processes. By harnessing waste heat, these cells generate energy from a previously unusable source and they reduce significant contributions to climate change.

Another practical use of these panels could be to sustain low-power appliances. One example of a large-scale application like this is streetlights. Many are already equipped with solar panels and small batteries, but an additional source of power generated at night could revolutionize the lighting industry. Thermoradiative cells, used in conjunction with energy-efficient LED lights, could remove any need for developing batteries to store solar energy for night use.

“We need to have other sources of energy after solar cells stop working at sundown,” Deppe said. “This project is trying to allay any reliance we have on batteries to store solar energy and reduce our reliance on fossil fuels to help throughout the night.”

Sustainable energy sources even have the potential to phase out fossil fuel use entirely. In the case of PV cells, they are already a feasible alternative to fossil fuels in terms of production, installation and the amount of energy generated.

“Photovoltaic technology now costs the same as fossil fuels to install in the U.S. and is even cheaper in places that do not have centralized electricity grids already,” Moule said. “In those places, the panels can be contained in one building or town/village/city without the need to develop an extensive electricity grid. From a technical perspective, there is no need to ever install another fossil fuel electricity plant anywhere.”

Although the possibilities seem endless, thermoradiative cells are still in development. The materials engineering and design aspects are still undergoing rigorous testing.